Attention Selection families: TODAY is the last day to confirm your decision to accept an offer for a school placement BEFORE 5:00 PM. Offers still pending will auto-decline at 5:00 PM. Find info HERE.

The Man Behind the Name

Ethan Allen was born on January 21, 1738, in Litchfield, Connecticut.  Litchfield, Connecticut was only considered a colony.  Allen grew up on the frontier and learned about farming.  He was given an education growing up with some philosophical studies.  As he became a young man he showed great potential in becoming a strong leader.  Allen became a strong political leader and helped formed the state of Vermont.  He also helped form and lead the Green Mountain Boys.  This group of soldiers came to the aid of the colonists during the American Revolutionary War.  The Green Mountain Boys under the command of Ethan Allen helped seized Fort Ticonderoga.  However, later on, The Green Mountain Boys were captured by the British and held prisoners on the HMS Gaspee.  Commander Allen was released in a prisoner exchange in 1778.  Upon returning from capture, Ethan Allen continued to work and fight for the colonies and for freedom.  He became a continental soldier until the end of the Revolutionary War.  After the war, Ethan Allen wrote and published a book about his experiences during the war and his imprisonment.  He also helped in producing and writing philosophical treatises and documents relating to the politics of Vermont’s formation.  Besides having a political career, Allen had successful farming operations, early iron work in Connecticut, and land speculations in Vermont.  On February 11, 1789, at the age of fifty-one Ethan Allen passed away in Burlington, Vermont.  His grave is located at Greenmount Cemetery in Burlington, Vermont.

Ethan Allen Elementary School broke ground in the year 1929 and was completed in 1930.  It was designed by Irewn T. Charine using an Art Deco Style.  Ethan Allen Elementary School was added to the National Registrar of Historic Places in the year 1988.  It fit the criteria of having the “distinctive characteristics of the building by architecture and construction including having great artistic value or being a work of a master”.   www.focus.nps.gov/AssetDetail/NRIS/88002227 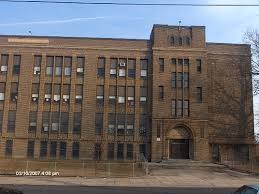